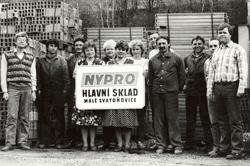 The joint stock company NYPRO, a.s. continues activities of NYPRO, s.r.o., Malé Svatoňovice, which was established as a private company in March 1991 by the brothers Jiří and Miloš Nývlt. From the beginning, its main activity focused on wholesale trade in steel material, in 1992 the company’s product range was extended with construction material. In early 1992, the company moved to its own premises in Malé Svatoňovice, situated 15 km from the town of Trutnov in North-East Bohemia. The main warehouse was set up there, and separate construction supply stores were gradually established in Úpice, Mladé Buky and Broumov. 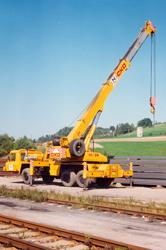 The original warehouse premises in Malé Svatoňovice ceased to meet the company’s needs, so in 1995 it was decided to build a new metallurgical material warehouse. This modern facility with a railway siding and a covered area of approximately 6,000 m2 was commissioned in August 1996.